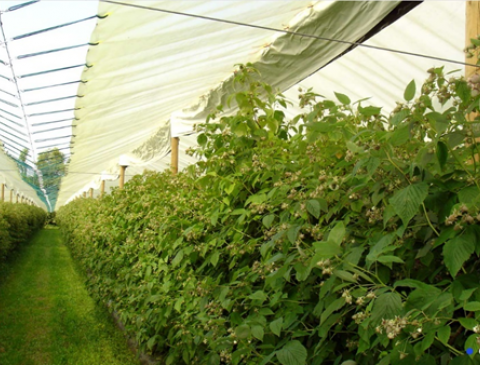 DALIN POCKET THERMIC WITH BLACK & WHITE STRIPE:  Transparent patented plastic film. It comprises a main thermic film that bears a welded black & white stripe of width 60-80 cm. It is used for covering asparagus throughout the season and it can be employed for two consecutive seasons.

DALIN POCKET THERMIC FOR WHITE ASPARAGUS: Transparent plastic film employed to activate the asparagus cultivation. The weight (soil) is inserted through openings along the sides of the film. The grower has the possibility to cover and uncover the ridge according to the cultivating works (harvesting asparagus, weed eradication, refreshing the ridge etc.).

DALIN LOW-TUNNELS: Plastic film for covering linear cultivations such as watermelon, melon, tomatoes etc. under low tunnels. It is produced employing linear polyethylene LLDPE and it exhibits superb mechanical properties. Used to achieve earliness or to protect the plants from frost.

MULCH FILM PERFORATED: Several perforated solutions are provided, also facilitating the planting phase as holes are already in place. No additional effort is required from the grower to cut the filf before planting> Easy of mind, labor cost savings

DALIN POCKET ADVANCE: Patented product that solves a long lasting issue. Pockets often get empty thus needing refilling, which implies more labor cost.  A smartly designed valve facilitates the filling of the Pockets however once soil enters the pocket it is trapped. Rain water can enter but escapes though micro perforated holes on the pocket itself. Better performance bearing great benefits for the asparagus growers.

DALIN POCKET THERMIC: A brilliant solution for growing green asparagus. Green asparagus is a rather delicate product that when exposed to adverse weather conditions can deteriorate in quality either due bending or due to high levels of humidity that allows the growth of fungi or diseases.

DALIN POCKET EASYFILL: A patented product bearing a Pocket type that facilitates filling the pockets of the film with soil. The special design of the pocket allows for ease of use, less time to fill the pockets thus saving labor costs when applying the film on the field. A great invention for a smart grower.

DALIN POCKET BLACK & WHITE:  A non-transparent 3-layer film for covering asparagus. It has a black and a white side. It is employed as a second film when the cultivation has been activated by a thermic film.